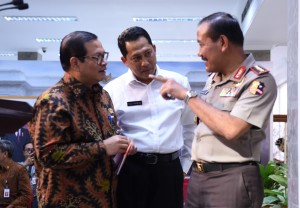 The fight, President Jokowi said as quoted by the Cabinet Secretary Pramono Anung when starting his press statement after a limited meeting, must bring great and firm impacts as well as give deterrent effects to drug convicts who have brought wide impacts to the present and the future generations.

Every year, the number of drug users, dealers, and convicts who smuggle big amounts of drugs to Indonesia increases by more than 13 percent, Pramono said quoting the report from Chief of the Indonesian National Police Gen. Badrodin Haiti and Chief of BNN Budi Waseso in a limited meeting on Drugs Eradication and Rehabilitation Program for Drugs Abuse Victims held at the Presidential Office, Jakarta (24/2).

In the limited meeting, Pramono explained that President Jokowi instructed related ministries/institutions to cut all drugs chains in every access.

Including small access which are used as places to smuggle drugs so far, Pramono said.

President Jokowi, Pramono added, has also instructed Chief of the BNN and Chief of the Indonesian National Police to prepare K9 detection dogs in a significant number to detect drugs in order to help drugs eradication and fight against drugs.

Through information from the neighboring countries on foreign ships that enter the country via sea to smuggle drugs, a special task force will be assigned to address the problem, Pramono said.

Meanwhile, Chief of the BNN Budi Waseso said that President Jokowi has assigned him to lead the efforts to prevent and eradicate drug abuse, as well as to rehabilitate victims of drugs abuse.

(The President) will oversee the programs from the BNN Chief and it involves all ministries, including Indonesian National Police Chief and the TNI, Budi said.

Budi also confirmed that there will be a special task force to manage the drugs problem integratedly.

Thus, the information from the special task force will be handled together according to their own roles in the management of drugs issue in the future, Budi said, ending his press statement. (FID/UN/ES)(RAS/EP/YM/Naster)