President: Dont Live in a Daydream 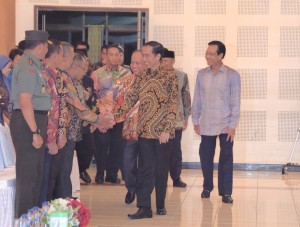 In one part of his remarks at the opening of the 2016 National Conference of the Indonesian RectorForum (FRI), in Yogyakarta State University (UNY), Yogyakarta, on Friday evening (29/1), President Joko Jokowi Widodo reminded that we needed speed in all things, speed in making decision and speed in responding quickly. Because this world changes not day by day. It changes every second, every minute, every hour. Iit always changes.

President gave some examples when we were afraid of Greek crisis back then. We were afraid it would impact on Indonesia, so we had to protect everything. The Greek Crisis had not finished, then Yuan depreciation appeared.

We tried to anticipate them, but when we had not finished with the issues yet, there was the rise of the Fed interest rates appearing. We had just lowered the BI rate, and then the oil prices dropped below 30 USD per barrel.

Those are not something that can be played around. Those things such as Greek crisis, Yuan depreciation, the increase of the Fed interest rate, the drop in oil prices happened very fast. If our mentality and character are still fond of subsidies or other things that pamper us, it can be very dangerous in the era of competition, said President Jokowi.

Thus, President asked Indonesian Rector Forum not to live in a daydream. It means that we dont work for our own environment. If we do research, it must be able to be implemented in and is beneficial to the community. It is not for ourselves or the campus only, affirmed President Jokowi.

President asserted, we are now competing with other countries. He asked universities to keep doing researches that reinforce innovation and strengthen the competitiveness of the nation. In addition, universities also need to strengthen responsive management, and have the capability of looking for creative funding.

We can ask the Ministry of State-Owned Entreprises to find state-owned enterprises which relate to biofuel, biodiesel, like Pertamina, and in healthcare such as Kimia Farma and others, to support the researches, he said.

President believed there were many ways to fund researches as long as the results are a concrete, tangible, beneficial for the nation. He wished that universities could cooperate with the government, state-owned enterprises and business world as well.

That is what we wished for in the future. Moreover, the under-developed regions, remote areas, outermost regions, border areas, and villages also need of supports from universities to improve their management systems by giving assistance so that we can work and move forward together to generate better competitiveness, productivity and work ethic, affirmed President.

The 12th Campus Convention (Konvensi Kampus XII) and 17th Annual Gathering (Temu Tahunan XVII)  were also held during the conference on 29 to 31 January 2016.