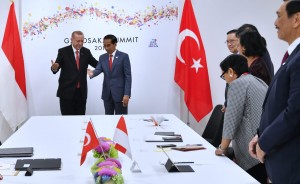 Turkish President Erdo?an has once again congratulated President Jokowi on winning a second term in office.

Erdo?an congratulated his Indonesian counterpart on the sidelines of the G20 Summit in Osaka when the two leaders held a bilateral talk on Saturday (29/6).

For the record, President Erdo?an was one of the world leaders who phoned President Jokowi to congratulate him as soon as the poll results were announced.

Erdo?an also said he plans to visit Indonesia in next year and it will mark the 70th anniversary of diplomatic relations between the two countries.

Both leaders also expressed hope that the preparation of the visit can immediately prepared so it can produce concrete cooperation that benefits both countries.

During the meeting, the two leaders also agreed to boost trade between the two countries. The Turkish President also offered several strategic industrial cooperation to his Indonesian counterpart and expressed his support for Indonesia’s candidacy on the UN Human Rights Council for the 2020-2022 period. (EN/GUN/ES)