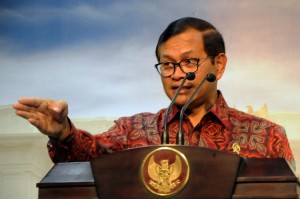 President Joko Jokowi Widodo has taken assertive measures related to the misusing of the Presidents name which lately boasted involving Indonesian House of Representatives (DPR)s high ranking officials. The President also took assertive measures on the issue of mining contract (kontrak karya) renewal, which will be ended in 2021.

Cabinet Secretary Pramono Anung asserted that President Jokowi delivered his vision that he will always prioritize national interest in handling the case of Freeport.

According to the Cabinet Secretary, there are four points that become the foundation of President Jokowi; firstly, when it comes to royalties, there must be an improvement of the royalties for us.

We, as the Government of the Republic of Indonesia, consists of central and regional governments, Cabinet Secretary said to the reporters after a limited meeting at the Presidential Office, Jakarta, on Tuesday (17/11) afternoon.

Secondly, the Cabinet Secretary added, the divestment must be implemented because it is already regulated in the provision of the Law saying that there must be a divestment in mining contract (kontrak karya). Thirdly, regarding the smelter construction, and lastly regarding the development in Papua.

The President gives direction to the related ministries based on the four contexts, Pramono firmly said.

Regarding the rumor, issue, and discourse that are spreading across the country, Pramono Anung said that President Jokowi reaffirmed that he respects the House of Representatives Ethics Council (MKD) and completely let the MKD solve the problem.

According to the Cabinet Secretary, President Jokowi only talks about Freeport on the four contexts, which are royalties, divestment, smelter, and Papua development.

Asking about the name of one Coordinating Minister that was mentioned on the case of President and Vice Presidents names misuse, the Cabinet Secretary said it is already reported to the MKD, and MKD authorizes to summon anyone when it is needed.

Regarding whether the President will summon the certain Coordinating Minister or not, according to Pramono, it depends on the President as the policy holder.

The Cabinet Secretary explained that President Jokowi reaffirmed that he only wants to talk about Freeport on the four contexts. Thus, when several issues outside the contexts arise, including regarding powerplant and company shares, the President never talk about it.

What will happen will be determined by the MKD, because the process is in the MKD and the decision to follow up the case is handed to MKDs authority.

Meanwhile, in the internal Government, according to the Cabinet Secretary, the President certainly will coordinate with the related ministries in order to interpret the Presidents will, thought and decision regarding the four contexts. (GUN/RAH/ES) (RAS/MMB/YM/Naster)