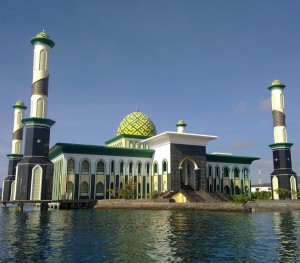 Previously, President Jokowi perform launching the construction of the New Town for the capital of North Maluku province and the inauguration of the infrastructure project.

In North Maluku President laid the first stone of the Grand Mosque, and the Ecumenical church in Sofifi.

Earlier, on Thursday (7/5), the President opened the working meeting of National Association of the City Government of Indonesia (APEKSI) 2015 in the Ballroom of The Natsepa Resort & Conference Center, Ambon.

On the way to the place of stay, President Jokowi pick down from the presidential car for a few minutes to greet dozens of residents were awaiting his arrival in Ternate.

President shook hands with residents in Akehuda Village, North Sangaji Village, and Kampung Makassar Village and Kampung Pisang Village, District of South Ternate, although at that time the city of Ternate was raining.

President Jokowi will make a working visit to Maluku, North Maluku, West Papua and Papua until May 12, 2015. The President then will continue his state visit to Papua New Guinea.(Humas Setkab/ES)