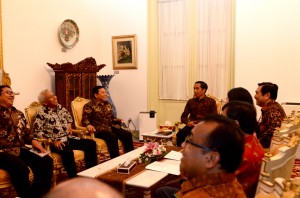 President Joko Widodo accompanied by several Working Cabinet Ministers held a consultation meeting with the Speakers of the House of Representatives (DPR) of the Republic of Indonesia, at the Merdeka Palace, Jakarta, on Tuesday (13/10) afternoon.

Consultation meeting between President Joko Widodo and the Speakers of DPR which took place at the Merdeka Palace, Jakarta, on Tuesday (13/10) afternoon, lead to a conclussion to solve urgent economic issues and to postpone the discussion on the revision of Corruption Eradication Commission (KPK) law.

Coordinating Minister for Political, Legal and Security Affairs Luhut Pandjaitan explained that the Speakers of DPR and the President have agreed to the perfection of the KPK law. However, according to Luhut, the discussion will be performed after the upcoming session because the Government thinks that they need to wait until the recovery process of the economy goes well.

The Government and DPR will focus to finish it in the 2016 State Budget Bill (RAPBN), as well as to prepare its related policies. I think the agreement is created in a friendly atmosphere. We understand each others positions; the Government understands DPRs position, vice versa Luhut said to the reporters after the consultation meeting.

Meanwhile, the Speaker of the House of Representatives Setya Novanto said that DPR is currently discussing the 2016 RAPBN that must be completed before 28 October 2015 and DPR will recess starting on 30 October 2015.

Therefore, Setya added that DPR and the Government agree to put the issue of the 2016 RAPBN discussion as the first priority, in accordance to the statement delivered by Coordinating Minister Luhut B. Pandjaitan.

This meeting is obviously gave a big picture which enables us to solve the issues related to the perfecting of KPK law properly. We pay attention to all issues, particularly on how we could strengthen KPK to become a better institution, Setyo Novanto said.

Meanwhile, Coordinating Minister Luhut added that the President also explained national economic development condition at the consultation meeting. We shall focus on this matter first and DPR will enter a recess period in several days. So, the timing is just right, we agreed to discuss it on the next session, Luhut said.