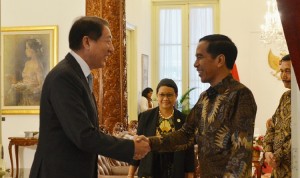 Minister of Foreign Affairs Retno Marsudi explained that several issues were discussed on that meeting. First, the meeting reaffirmed that Indonesia and Singapore are very important partners because Singapore is the biggest investor for Indonesia and our trade with Singapore shows outstanding outcomes.

To reaffirm the commitment of both countries to continue this very strong economic relations Retno said to the journalist after accompanying President Joko Widodo receiving Deputy PM of Singapore Teo Chee Hean.

Third, the meeting also discussed smoke problem. According to the Minister, Singapore expressed its commitment to cooperate with Indonesia to prevent this problem in the future.

From Indonesias side, the Minister added, we emphasized, in the context of ASEAN, that we already have ASEAN Agreement on Transboundary Haze Pollution and we also cooperate in that context.

According to the Minister, the two countries also discussed the FIR (Flight Information Region) issue. She explained that at the moment, Indonesia is preparing technical preparation in order to takeover our FIR that now belongs  to Singapore.

Singapore explained that the FIR has nothing to do with sovereignty. We have the roadmap and we have prepared it. Singapore agrees to help Indonesia in the preparation, the Minister said while reminding the preparation needs more than one year.

According to Retno, the preparation of Singapore has not been discussed in details. She said that Indonesia s Ambassador to Singapore will later follow up the cooperation that will be established with Singapore to increase our capacity in safety sector.