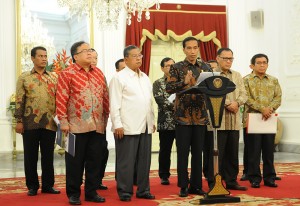 Eventhough Government has takena number of actions to create a condusive macro economic condition among others by promoting the acceleration of governments spending, through an acceleration of budget absorpsion and also doing the steps for strengthening payments balance, President Joko Widodo (Jokowi) admitted that the actions are not enough.

Therefore, he added, the Government continuedmaking  efforts to boost national economy by announcing a Policy Package which is called as Policy Package of September 2015 First Phase.

There are 89 regulations reviewed out of 154 regulations received by the team so that this can eliminate duplication as well as strengthen coherence and consistency, the President said.

The action for reviewing, the President added, would be followed by eliminating irrelevant regulations or regulations which hamper competitiveness of  national economy.

Furthermore, he said that the Government hadtaken a measure to simplify permits, improve permit work procedures, strength sinergy, improve service quality, and use electronic base- service.

The Government is committed to finishingall package deregulation in September and October 2015. Thus, there will be Package I, Package II, and perhaps Package III and we will do it consistently, President Widodo noted.

“We can do it by simplifying  permits, finishing layout and land clearing, accelerating the procurement of goods and service of the Government and discretion in finishing the obstacle and law protection, the President stated.

President Joko Widodo explained that the Government announced a policy to boost housing development particularly for the people with low salary and provide a bigger investment opportunity in property sector.

The President stated that the Economic Policy Package is aimed at re- triggering the real sector which eventually create a strong foundation for our economic development in the future.

In the last part of his remarks , President Widodo said that the Government could not work alone. The Government needs cooperation, togetherness and support.

Let us unite and work together to face the challenges of the global economic slowdown, the President said.

He stated that the Government is not only committed to improve the national economic by announcing the Economic Policy Package; yet, the Government is seriously implementing the Policy.I, assisted by Vice President and all Cabinet members, will directly lead the implementation of the Policy Package so that the actions to boostthe national economy can be realized, he stated.