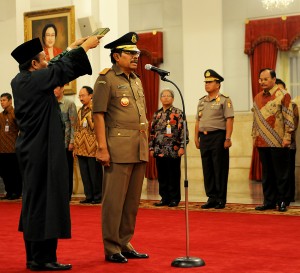 Already…Already. Mr. HM. Prasetyo would be sworn at 02:00 PM, says Andi Widjajanto answering the press related the news, at Presidential Palace area, Jakarta, Thursday (20/11). He adds in order to ensure his independency, HM. Prasetyo has been asked to resign from Nasdem. Yes, we asks him to resign from Nasdem. Ensure independency as Attorney General, or the President says if he could not do that then we would replace him immediately, Andi says.

Minister of State Secretary Pratikno also confirms the news, and adds that the Presidential Decree has released on Wednesday.