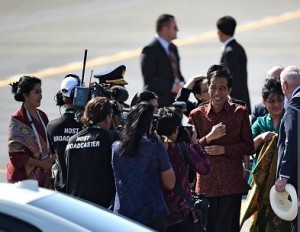 Hectic schedule is also waiting the President in Brisbane, such as bilateral meeting with Prime Minister Tony Abbot, on Friday (14/11) Night. The President is also scheduled to visit Queensland University of Technology to meet Indonesian students who study there. The peak of his schedule would be to attend the opening of G20 summit, on Saturday (15/11), and various discussion forums until Sunday (16/11).

Meanwhile, Director of Economic Development and Environmental unit of Ministry of Foreign Affairs, Toferry Soetikno, in Jakarta, Wednesday (12/11) says President Jokowi would gives a speech on Economic and Bureaucracy Reform at the G20 summit in Brisbane, in a closed meeting. President Jokowi is particularly asked to speak about his experience in conducting economic and bureaucracy reform when he was a Mayor in Solo and Governor of Jakarta, says Toferry.

In addition, Toferry explains that Indonesia would deliver issue regarding mariting development and its contribution on global economy development. Under Australia Chairmanship, G20 commits to improve global growth by two percent, its in line with Indonesia domestic growth which is seven percent, says Toferry. One of many possible ways to make that happen is by optimizing Indonesias marine potentiality. (Wid/ANT/ES)(Ifp)