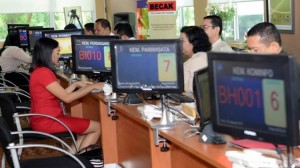 Head of Investment Coordinating Board (BKPM) Franky Sibarani said that through a one-stop integrated service (PTSP), his office had simplified  investment licenses.

For instance, he said, for electrical investment license, previously it required 49 licenses and took 923 days and since January this year, after the PTSP was launched, the license process has been simplified with 25 licenses and took only 256 days.

However, President Joko Jokowi Widodo still asked all Ministers under the coordination of Coordinating Minister for the Economy to do simplification. According to the President, the ideal one is that it only takes 1 day or even 1 hour. Thus, in an hour, all licenses can be fulfilled, Franky said to reporters after the limited meeting on the issue of Foreign Direct Investment (FDI) at the Presidential Office, Jakarta, on Wednesday (16/9) afternoon.

Previously, on the same occasion, Coordinating Minister for the Economy Darmin Nasution said that even though investment realization during the First Semester in 2015 rose by up to 16.6 percent compared with the same period in the previous year which was from Rp 222.8 trillion to Rp 259 trillion. President Jokowi still considered that so far the license process or the procedures to get investment license in Indonesia was still not satisfying yet.

The example is in the electrical side. The President still remembers that a total of licenses for electrical investment is 49 licences and it takes time about 2.5 years or 923 days. Even though, there has been a suggestion to simplify the license into 25 licenses for 250 days, Minister Darmin Nasution noted.

Franky admitted that in the limited meeting, there were some measures which could ease the investors.

He gave an example that through one license or the principle license issued by the BKPM, it also gave an approval to investors to make their investment directly, while other licenses can be processed along with the provisions to be discussed further.

The point is that we, all related ministers, must hurry to simplify the things in which it is the Governments duty to give ease and a good investment climate for investors, Franky said.

Regarding the investment realization itself, Franky said the description delivered by the President by citing data from Financial Times saying that the global investment decreased by 15.8 percent in the first semester in 2015, but the investment in Asia Pacific increased by 9.2 percent.

For ASEAN, Franky added, Indonesia absorped 31 percent of the total of global investment which enter ASEAN for 10 countries and it is bigger than Malaysia (16 percent) and Vietnam (17 percent).  On the other side, he said, the investment which enters ASEAN during the First Semester in 2015 compared with the same period in the previous year decreased at 3.2 percent.

Once again, the important point is that the investment that enters Indonesia during 2015 in the first semester has increased  by up to 62.4 percent. This is mentioned in the data of Financial Times, Franky noted.