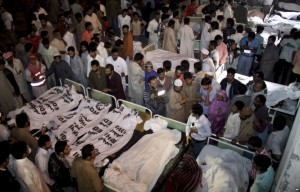 Indonesia condemns the bomb attack in Lahore. Terror cannot be justified whatever the motive. My heart goes out to the victims, the Pakistani people, tweeted the President in his twitter account @jokowi, few hours ago.

The explosion occured when many people were at the park to celebrate Easter holiday, killed at least 65 people and wounded 300 people.

Meanwhile, Indonesian Ministry of Foreign Affairs stated that based on the information from Indonesian Embassy in Islamabad, Pakistan, there is no Indonesian citizen who becomes the victim of this, suspected, suicide bombing.

Minister of Foreign Affairs Retno Marsudi, on behalf of the Government and people of Indonesia, extends her deepest condolences and sympathy to the victims and their families, tweeted Indonesian Ministry of Foreign Affairs account.  (ES)(MMB/YM/Naster)