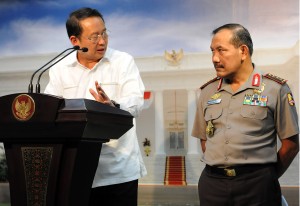 According to Head of the National Agency for Disaster Management (BNPB) Willem Rampangilei, President Joko Jokowi Widodo during the meeting instructed all government ranks to immediately extinguish the forest and peat land fire and clean six provinces in Sumatera and Kalimantan from the haze caused by the fire.

Willem added that time needed to extinguish the fire and to clean the haze depends on the respective provinces in line with existing threats on the ground.

For Riau Province, Willem said, time needed to extinguish the fire is set for 14 days, starting from Thursday (10/9), while, in South Sumatera and Jambi Provinces, 30 days period is needed to contain the fire.

It started from Friday in South Sumatera and Monday in Riau Province. And so did in other provinces in Kalimantan, Willem said.

Willem further said that according to scientific data, the number of hot spots in Kalimantan and Sumatera has decreased and the situation had slightly improved. As the result of the attempts to extinguish fire through air and land ways, to prevent new forest fire, as well as the impact of rain in haze-affected areas.

We use this situation to intensify our efforts to extinguish the fire through land or air by using water bombing and weather modification technology or artificial rain. (We also) disseminate (to the people about the fire and the haze) and we strengthen law enforcement as well, Willem concluded. (ES/Humas)(RAS/EP/YM-Naster/Sy)