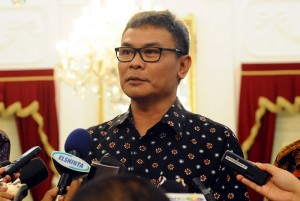 Presidential Spokeperson Johan Budi Sapto Prabowo firmly said that until now, President Joko Widodo has not made any decision on the methods used for constructing Masela block, whether it is offshore or onshore.

The President still reviews all aspects of Masela Project considering the scale and complexity of the project. The decision must be made very carefully, he said through a written message on Tuesday (23/2) afternoon.

This statement was delivered by Johan Budi to respond the news in a number of mass media reporting the Government of Indonesia will develop the Abadi gas field in Masela block by constructing an onshore LNG plant, considering the Government really pays attention to multiplier effects and economic development acceleration in, particularly, Maluku, as well as East Indonesia, in general.

Johan Budi firmly said that in the issue of Masela block, the President considers numerous aspects, such as commercial, technical, social, culture, and economic aspects, as well as the development of the region.

Until now, the President has listened to numerous inputs and has understood the arguments from both parties that suggest to build an offshore or onshore plant, Johan stated.

According to him, the main attention of the President is how the people of South Maluku and Maluku Island in general, get full benefits from the project. However, it should also give full benefits to the country, he said.

However, that estimation is much different from the Inpex and Shells; two companies that will develop the Masela block project. They estimate the cost to build an offshore plant is only US$ 14.8 billion while an onshore plant needs US$ 19.3 billion.

It makes Indonesian Government extra cautious. The Government also learns from the experience of the construction of an offshore plant in Prelude, Australia. The construction must experience a delay and the cost rises significantly. Prelude has spent US$ 12.6 billion, whereas its capacity is only 3.6 million tons/year, or 48% from the capacity of Masela (7.5 million tons/year).