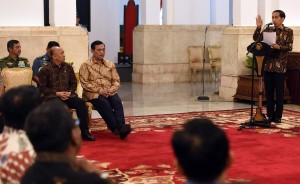 President Joko Widododelivered a remarks at the 2015 International Human Rights Day, at the State Palace, Jakarta, on Friday (11/12)

President Joko Widodo admitted, there are still a number of issues that must be handled concerning the enforcement of human rights in Indonesia. The President mentioned several examples, such as human rights cases in the past, the fulfillment of peoples rights for education and health, traditional society, agrarian conflict, and fulfillment of minority rights.

The President expected that these problems can be solved well because he believes that there must be a solution for every problem.

The important thing is we must be brave to solve it, both through judicial and non judicial ways, the President said when delivering a remarks at the 2015 International Human Rights Day, at the State Palace, Jakarta, on Friday (11/12) morning.

I also want to remind that there are rules in demonstration. However, with these rules it doesnt mean that we want to curb freedom of expression, the President explained.

According to the President, there must be real effort and synergy between the National Committee of Human Rights (Komnas HAM), law enforcement officers and legal institutions to solve human rights problems for the sake of the people.

It is the duty of both central and regional governments, the President said.

Previously, at the beginning of his remarks, President Joko Widodo said that every one wants to respect and uphold the human rights not because it is the mandate of constitution but because human rights is the base of any relations.

The President affirmed that the Government carries humanity values as the foundation of Government and peoples relations. How the Government provides and guarantees the need of the peoples political rights, economy, education, as well as freedom of religion or belief, the President said.