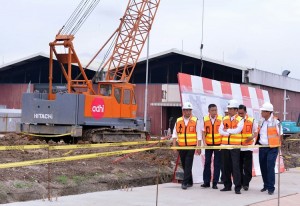 The President said that at the moment, they only need to finish the last 12 kilometers of track, that is the track from Batuceper Station to Soekarno-Hatta Airport. It is projected to be finished and be ready to be used by semester 1 of 2017.

According to the President, after the track is finished, people will be able to travel from Manggarai to Soekarno-Hatta in 40 minutes. The President admitted that traffic jam is the main problem if the people use cars from the city center of Jakarta to the Soekarno Hatta Airport. It is the solution of this problem, the President said to the journalists at the location.

The President emphasized, in the future, not only Jakarta that has railway from the city center to the airport. Other densely populated cities must also have this kind of railway. There must be mass transportation from the city to the airport, such as in Palembang, Surabaya, Padang, and Yogyakarta, he said.

The President was accompanied by several high-ranking officials on that visit, such as Minister of Transportation Ignasius Jonan, Minister of Agrarian and Spatial Planning/Head of National Land Agency Ferry Mursyidan Baldan, and Presidential Chief of Staff Teten Masduki.

Minister of Transportation Ignasius Jonan explained that from the 12 kilometers of the track from Batuceper Station to Soekarno-Hatta Airport, 6 kilometers of it belongs to the airport (PT Angkasa Pura II) while another 6 kilometers is gotten from land acquisition.

According to Jonan,  the investment value of this project worth Rp 2.5 trillion. The type of the train that will be used is the same with the train operated in Kualanamu Airport – Medan railway.

Meanwhile, Ferry Mursyidan Baldan said that there is still problem in land acquistion process, about 1 kilometer, in Tanah Tinggi Subdistrict. However, the problem has been solved. Another area that still has problem is the area at JORR II (Jakarta Outer Ring Road). It is still in consolidation process. It is expected to be finished by 8 February, he said.

Managing Director of PT Kereta Api Indonesia (KAI) Edi Sukmono explained, one of the approaches carried out in land acquisition isfor every family whose land will be acquired, PT KAI will give an opportunity for one member of the family to be the employee of PT KAI.

Edi mentioned, there are 815 areas of land that must be acquired. We assume there are 800 heads of household, he said. (MMB/YM/Naster)