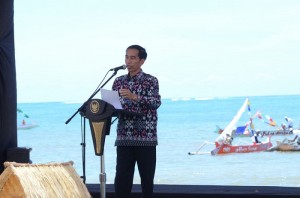 President Joko Widodo said that we are lucky living in the era of the freedom of the press where every day we are flooded with various information, opinion, and data.

All of us can see how easy we get news and information. Sometimes a personal status in social media can be circulated as news. Some of news are bitter, like herbal medicine, but some of them are like vitamin that can make us healthy. However, those can also harm our mental health, the President said when delivering a remarks at the peak Commemoration of National Press Day in Kuta Beach, Mandalika Special Economic Zone, Lombok, West Nusa Tenggara, on Tuesday (9/2) morning.

The President expects all members of the press can build public optimism, the peoples work ethics, as well as the peoples productivity. Not the contrary. Sometimes, our media influences us to be pesimistic and we are trapped in sensational news, he said.

The President mentioned an example of a news that predicts Indonesia will collapse. There was also a news reporting all people are pesimistic Indonesia will achieve the target of economic growth. Moreover, there was a news which headline was the Government failed, act of terror can not be destroyed.

There are more bad headlines, the President added, such as The problem of smoke can not be solved, Riau asks for independence. There is even a worse news Indonesia will collapse, Rupiah goes through 15,000, Jokowi-JK will go down, the President said.

According to the President, if the press continues to make these kind of headlines, it will bring pessimism. It will also cause bad work ethics as well as unproductive things, whereas those headlines are just assumptions.

The President admitted that all television stations are prioritizing the rating. However, some of the time slot can be given to play those songs, he said.

The President reminded that in this competition era, we need to build trust. He asserted that with trust, capital and investment will enter Indonesia.

We will get capital and investment if we are trusted. If we are not, do not expect for the money, investment, or capital, the President said while mentioning that it is the press that can build the trust because the image appears due to our news.

The President also highlighted the speed to make a news, especially in online media. He admitted that he always read, particularly when he is in the car or the plane. He criticized the news that violates journalistic ethics. Since the journalist wants to make a news a soon as possible, the news become inaccurate and imbalance. Facts and opinions are mixed up and sometimes the news is judgemental. It is very dangerous, the President said.

The President hopes the press can be trusted by the public as the pilar of our democracy, by providing an honest, accurate, and objective information and giving a space for the voice and thoughts of the people.