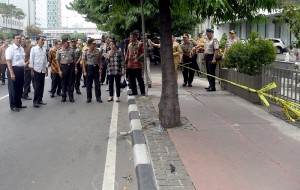 After visiting several sites of the suicide bomb and attack, the President returned to the Presidential Office to lead a limited meeting discussing this problem.

Previously, in his statement to the journalists in Cirebon, West Java, on Thursday (14/1) afternoon, President Joko Widodo expressed his profound condolence for the victims. The Government will pay for the medical cost of the victims, the President affirmed.

From identification, the total of the victims is 16 people, Budi Gunawan said when visiting the location.

Four terrorists were among the deaths, according to him, whereas there were seven civilians became the victims. Two of them died.

Budi explained that the attack was started with grenades blast near Starbucks at Skyline building. After that, two people attacked a police post located in the intersectionof Jalan M. H. Thamrin and committed a suicide bomb attack. They were killed at the post.

The officers from Metro Jaya Regional Police and Special Detachment 88 Antiteror chased the suspects and managed to shot them to death. (UN/ES) (MMB/YM/Naster)