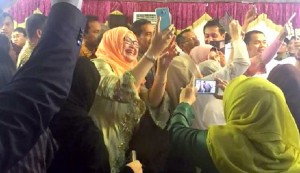 President Joko Widodo said that compared to 1998, the condition of politics and security in Indonesia at the moment is better. However, the President admitted that Indonesia is facing economic pressure, although we are not alone, and we are better than other countries.

It was from Rp 1,800 jumping to Rp 16,000, almost seven times higher. Meanwhile, when my tenure was started, it was Rp 12,500 which actually was a burdonsome for all of us because we oftenly import goods, President Joko Widodo said when meeting Indonesian Diaspora, in a gathering at Wisma Duta, Doha, Qatar, on Monday (14/9) evening.

The President explained why rupiah exchange rate breaking into Rp 14,000. Besides influenced by global economic condition, another factor that influences the conditions because we import too often. Therefore, now we have to find the way to substitute the import goods, the President said, so that we can reach self-sufficiency.

According to President Joko Widodo, we do not only import electronic goods, but also corn, soybean, sugar, chilli, onion, and salt. Yet we have the potential and strength to solve this import issue, but it takes time, the President explained.

If we no longer import, dollar fluctuation will not influence us much. Actually seeing from export competition side, rupiah at this position is good for competition at global and export markets.

Therefore, the President emphasized the importance of transformation from consumption sector to production sector so that it will be stronger, such as increase of rice, soybean, corn, sugar, and meat production, though it takes time. I order Minister of Agriculture to solve the problems of rice, soybean, and corn in three years, while sugar in five years, and meat needs more than five years, the President said.

Another issue that becomes attention of the Government is infrastructure, for example trans Sumatera toll road. If it is not started immediately, the price of land acquisition will be more expensive, President Joko Widodo said.

The President added, the Government will immediately start the construction of infrastructures such as railways in Sulawesi at the end of this month and at second semester of 2016 the development in Papua will be started.

President Joko Widodo affirmed that the key of our countrys prosperity is to increase the money circulation in our country. Hence, if there is an investor who wants to invest in any sector, the Government will give its permit.

If there is any party wants to invest in infrastructure, we will give the permit the President said.