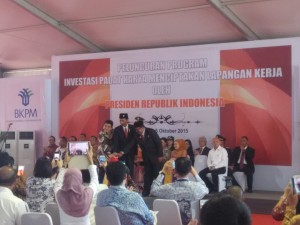 President Joko Widodo accompanied by the Head of the Investment Coordinating Board (BKPM) and Governor of Banten launched 16 Labor Intensive Investments in Balaraja, Tangerang, Banten, on Monday (5/10) afternoon.

President Joko Widodo appreciated Labor Intensive Investments which are conducted by 16 foreign investment (PMA) companies and domestic investment companies (PMDN). These companies will recruit 121,285 labors in a period of 2015-2019.

From 16 companies, there will be 26,780 labors to be recruited this year and another 47,000 will be recruited in 2016. I only mentioned the recruitments of the 16 companies. In another 2-3 weeks, I will announce the recruitments from other companies. I will anounce it continuously every month, President Joko Widodo said while launching a program Labor-Intensive Investment for Indonesian Workers Employment (Investasi Padat Karya Untuk Penyerapan Tenaga Kerja Indonesia) at PT Adis Dimension Footwear factory, West Balaraja, Tangerang, Banten, on Monday (5/10) afternoon.

President Joko Widodo hopes the inauguration of 16 companies could bring optimism. Do not only report the laid off (PHK) issue. When I asked about it, you should find who fires the labors. Meet the Head of BKPM. If there are some issues and obstacles, I will deliver it and please report it to the Ministry of Industry, Coordinating Ministry for the Economy and the Head of BKPM, the President said while mentioning that the intention is that the Government could provide assistance for the people needing it. Because, this matter is related to the people working for the companies.

From the data that I received last Friday, the State Budget (APBN) has been absorbed 64% from the total budget. By the end of this year, the budget is estimated to absorb 92-94% from total budget. So we are hoping that it will bring impact to the national economic growth, President Joko Widodo said.

Therefore, President Joko Widodo called on all parties to keep fostering optimism. When economic growth in other countries fall down, we should be optimistic that Indonesias economic growth could increase. We also expect that our economy will rise step by step in the upcoming years, the President said.

Previously in his remarks, President Joko Widodo said that global economy recently slows down and it happens as well in our country. However, the President asserted that we must be optimistic.

Why? Because there are a lot of opportunities in Indonesia that could be the source of investments and jobs, President Widodo said.

The President added that the Government has made several breaktroughs to attract the investors. For example in permit sector, investors or companies who apply will be served optimally. It only needs three hours for investors to process on the permit, after that they can directly start their works.

In the event, the President was accompanied by the Coordinating Minister for the Economy Darmin Nasution, Minister of State Secretary Pratikno, Minister of Industry Saleh Husin, Presidential Chief of Staff Teten Masduki, Minister of Manpower Hanif Dhakiri, the Head of Investment Coordinating Board (BKPM) Franky Sibarani, and Governor of Banten Rano Karno.