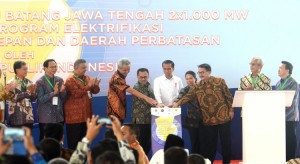 President Joko Widodo explained, this project was build under the cooperation from the government and private parties with more than US$ 4 Million investment value. It is the proof that the government can solve the problems and provide a way for solving investment problem. The project could be a model. We hope, optimistically, all problems of investment could be solved, the President firmly said.

Moreover, the coal-fired power plant project that is projected to be completed by 2018, is expected not to stop halfway because of the issues of permit and land acquisition. I hope all parties to start the work soon. I will conduct a sudden inspection, in another one month or two or three, the President said.

In a press release, Managing Director of Bhimasena Power Indonesia, Mohammad Effendi said that the coal-fired power plant project in Batang uses Ultra Super Critical Technology in order to boost the efficiency and to minimize the impact to environment. It uses the latest technology and it is the biggest in Southest Asia, Mohammad Effendi said.

On this occasion, President Joko Widodo also had a dialogue with the high-ranking officials of State Electricity Company (PLN) in five regions, including Maluku diesel power plant (PLTD) in East Nusa Tenggara through video conference.

The project was implemented under public-private cooperation pattern (Public Private Partnership/PPP). The project with more than US$ 4 Million investment value is the first PPP project that was based on Presidential Regulation No. 67/2005 on Cooperation Between the Government and Business Entities in Infrastructure.

Managing Director of PLN Sofyan Basir said that PLN has carried out the construction of diesel power plant (PLTD).

Sofyan added that his office has already built 149 units of diesel machine in 50 locations across 13 provinces from Aceh to Papua.

According to Sofyan Basir, through 678 MW PLTD, PLN will be able to supply electricity to 35,468 new users in outer islands and border areas. ((WID/DNK/BSM/RAH/ES) (Rany/Yu/Mia-Naster/Sy).