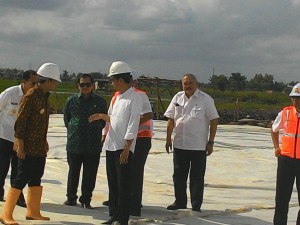 After inspecting the construction site of Light Rail Transit (LRT), President Joko Widodo inspected Indralaya-Palembang toll road project (3/3). The President explained that the length of this toll road is 22 km and the terrain is quite rough. 17 km of the 22 km toll road will be built on marshland and another 5 km will be built on firm soil, the President stated.

This project, according to the President, has been started since July last year. It is progressing well, despite the rough terrain.This project is a branch of Lampung-Palembang-Aceh toll project, the President said.

The progress of the project has just achieved 11 percent. Because it is surrounded by marshland. The water must be pumped up first and then the soil can be added to make the terrain harder. Hopefully, on dry season, it will be hard enough and paving process can be started, the President said.

The project is expected to complete in 2017. At least in the middle of the year, the President said.

This toll road, he added, is a branch of Lampung-Palembang and traffic jam has become an everyday problem in Palembang. Our anticipation is not for five or ten years, but we must imagine what will Palembang look like in 50 or 100 years from now. If the infrastructure is not prepared first, this area will be used to build houses or buildings which later will make the cost for land acquisition high.

The land acquisition has achieved 71 percent. It is a swampy area and the work does not stop even if it is raining, the President told the difficulties that must be faced in the project.

In this visit, the President was accompanied by Cabinet Secretary Pramono Anung, Minister of Public Works and Public Housing Basuki Hadimuljono and Governor of South Sumatera Alex Noerdin.(SM/EN) (MMB/YM/Naster)