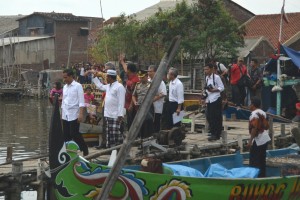 According to the Head of State, the message is that Indonesia is serious in taking firm action towards illegal fishing. We have to keep our ocean from robbery by outsiders, he says firmly. On Friday (5/12) morning, President Jokowi continues his message through facebook, that the sovereignty of Indonesian territory includes land, air and oceans. Therefore, in every inch of it is the honor of this nation.

Just like Javanese proverb used to be said by Bung Karno regarding the sovereignty of Indonesia: Sadumuk Bathuk Sanyari Bumi Ditohi Pati, every inch of territory defended by the risk of live because this is our honour, says Jokowi. President reminds this nation born from patriotism, attitudes that shows love to homeland, to love Indonesia unconditionally. the same love that become the obligation of this nation to safe guard Indonesia today and to pursue better future, more honorable and prosperous, he says.

Regarding the instruction to sinking the ships related with illegal fishing, two vessels of TNI AL; KRI Barakuda-633 and KRI-631 have arrived in Anambas island, of Riau Islands, on Friday (5/12) morning. We sinking them. Those three ships are belong to Vietnam, says the Commander of KRI Barakuda-633, Marine Major (P) Saryanto.

Saryanto then pointed the three Vietnamese Ships, about 1000 yard from KRI Barakuda-633. Those ships are said have done illegal fishing in Indonesian water.

The three ships are :

According to Saryanto, KRI Barakuda-633 would save the captains and seamen from those three ships before blown the ships. (*/ANT/ES)(Ifp)