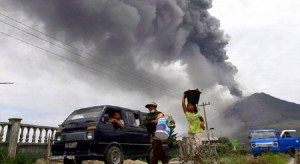 Head of Information Data Centre and Public Relations of National Agency for Disaster Management (BNPB) Sutopo Purwo Nugroho said that on Tuesday (15/9) at 08.20 a.m. Sinabung spewed hot clouds reaching 4,000 meters to the East  Southeast and the height of the volcanic ash column reaching at 3,000 meters.

The rain of ash is very intense in Brastagi, Kabanjahe and surrounding areas. This is the biggest eruption that occurs within this week, Sutopo said in his press release last week.

In relation to this, President Widodo on Monday (21/9) afternoon in Jakarta is scheduled to lead a limited meeting to discuss the further action to manage the eruption disaster of Mount Sinabung.

Since Tuesday morning, he added, the eruption of Sinabung has occured slowly.

He said that the eruption occured at 05.25 a.m. spewing an avalanches of hot clouds up to three thousand meters to the East-Southeast and the height of the eruption ash column reaching 2,500 meters. At the same time, the wind is moving eastward.

Sutopo Purwo Nogroho stated that the Mount Sinabungs eruption currently is alert status (level IV) followed by the continuous tremor, high activity and subsequent eruption. The evacuated area is radius of seven kilometers in the South-Southeast and six kilometers in the East.

There is no addition of refugees, he noted.

According to him, currently there are 2,572 people (9,313 Family Head) around Mount Sinabung that have been evacuatedin nine shelters. They come from nine villages recommended to be evacuated by the Volcanology and Geological Disaster Mitigation Centre (PVMBG). All basic needs of them are fulfilled and the children can still go to school. (ES/Humas) (JS/MMB/YM-Naster/Sy)