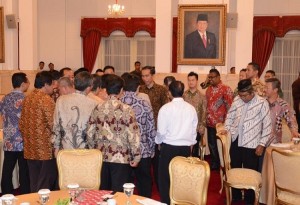 President Joko Widodo asked businessmen and rice mill enterpreneurs to support the program of the Government to achieve food self-sufficiency. He told that invitation in his remark when hosting a lunch for the rice mill enterpreneurs, rice businessmen, and rice merchants in Jakarta, Bogor, Depok, Tangerang, and Bekasi (Jabodetabek) at the State Palace, Jakarta on Monday (28/9).

The invitation is aimed at anticipating an abundant rice production in the future. Moreover, the rice harvest attended by the President last time in Karawang could produce 13.4 tons per hectare.

He stated that Indonesia must be ready for an increase of rice production. This increase must be advantageous not only for farmers, millers, and merchants but also for society.

No parties is aggrieved in this case, President Widodo said.

According to the President, he always monitors the market price from the report of the Ministers, the State Logistics Agency (Bulog) or directly monitors the price in market. If it is difficult to be controlled, we will conduct a market operation or find another solution, he noted.

On that occasion, President Joko Widodo expressed his concern about the number of national rice stock which is smaller than that in other countries.

Therefore, the President asked the farmers to work hard to produce rice. Last time, in Karawang, I saw that 1 hectare of land can produce about 13.4 tons of rice. Perhaps, in the reality, it can produce 10.7 tons per hectare, he said.

According to the President, beside saving the rice stock, it can also be exported.

President Widodo asked the businessmen to work well because he was a businessmen so that he really understands the trick of a merchant and what should be done to tackle the trick.

I do not want to disadvantage you. We are working together for the goodness of this country, the people and all of us, he stated.

Furthermore, the President instructed BULOG to buy all production of rice from the farmers in the future. All! Do not say that BULOGs warehouse is full. Since now on, BULOG must think about how many warehouse should be provided, he stated.