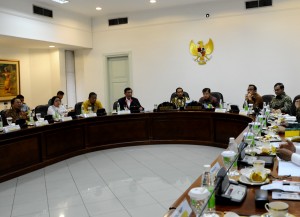 President Joko Widodo ordered the Attorney General, H.M. Prasetyo, resolve past human rights abuses cases so that it does not become a problem for all of us.

This problem must be resolved soon. We neet to start the process immediately, President Joko Widodo said when delivering an introduction at a Limited Meeting on Political, Legal, and Security Affairs, at the Presidential Office, Jakarta, on Tuesday (5/1) afternoon. Previously, the President expressed his appreciation to all personnels of Indonesian National Police (Polri), Indonesian National Defence Forces (TNI), and State Intelligence Agency (BIN) that worked hard to secure Christmas and New Year celebration. The President said that all people in Indonesia, such as in Papua, Aceh, and Poso need to feel secure.

And the country, through its security offices must provide this secureness to the people, the President said.

According to the President, in facing terrorism and radicalism,  the Government uses two approaches, namely soft and hard as well as strict approaches.

We can use both and we can also use security and strict legal approaches. However, we can also use dialogue approach including to face armed groups, either in Aceh, Papua, and Poso, the President affirmed while thanking once again for the hard work of BIN, Polri, and TNI in solving Din Minimis problem in Aceh and he wishesthe same thing can be done in Papua and Poso.

The President asked the Coordinating Minister for Political, Legal, and Security Affairs to lead the coordination in order to continue to review the real problems and immediately decide what must they do.

Regarding the process of amnesty, President Joko Widodo said that it will be granted but we must also review the human rights problems and the legal basis. But the point is we will grant the amnesty, the President affirmed. (GUN/UN/JAY/OJI/ES)(MMB/YM/Naster)