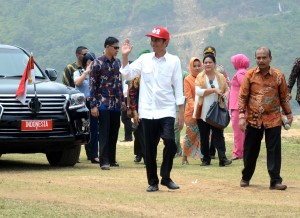 In his remarks, President Widodo admitted that he was startled when entered Mandeh tourist area. I could see from above the grace from God to us. We should be thankful for the beauty,President Widodo said while mentioning that he wondered what the location will become.

President Joko Widodo requested West Sumatra Governor and Pesisir Selatan Regent to have a discussion with the people regarding the utilization of the place. In my opinion, I do not shame you into doing this, but I think this location could be used as maritime tourist area for family, including diving and island tourism, the President said.

President Joko Widodo also ordered the Minister of Public Works and Public Housing Basuki Hadimuljono to finish the roads that have been paved recently.I give a target to finish it in 2 years. Minister Basuki should finish the work by target because his wife is from Pesisir Selatan, the President added.

President Joko Widodo agreed the previous opinion delivered by Minister of Tourism Arief Yahya who said that if this location turns into tourist area for family, then peoples incomes, as reflected from similar experiences, could be increased by five times from current amount.It will be great for the people, the Minister said.

According to the President, West Sumatra Province has several attractive tourist areas. Besides maritime area in Mandeh, there are heritage city, Sawahlunto, and the famous Singkarak Lake in Bukittinggi.

If they combined into one tourism package, the promotion would be easier, Pak Minister, because they will promote some location and regions at once. That was the duty which I ordered to the Minister of Tourism to make the areas integrated into one whole tourism destination package. So, when the project is finished, many peoples will visit West Sumatra, especially Mandeh, President Joko Widodo said.

In particular, President Joko Widodo asked Minister Basuki Hadimuljono to strengthen the character of Bukittinggi in their traditional houses. Each house in Bukittinggi should rebuild the bagonjong or taper-shaped like a buffalos horn roof. Do not let the character fades because it is Bukittinggi potential, the President said.

When gadang traditional houses and bagonjong disappeared and changed into common houses that we can see it everywhere, then for what purpose do we come here. President Joko Widodo reminded all that the tourists come to visit here because its culture and to see the beauty, uniqueness, as well as hospitality of the people. Those are the things that tourists want to see, there is no other thing, the President added.