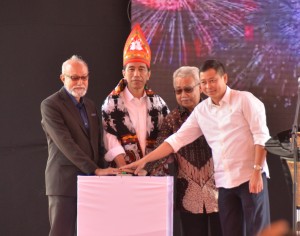 President Joko Widodo together with Minister of Transportation, Governor of Aceh, and Wali Nanggroe of Aceh inaugurates Rembele Airport in Aceh

President Joko Widodo urged regional governments to follow central government that continues to improve investment licensing process which at the moment, through one door licensing service, only needs three hours to finish.

The process should not take months or even years. It should be finished in several hours, the President said when inaugurating Rembele Airport, in Bener Meriah Regency, Aceh (2/3).

The President explained when he was just inaugurated, he immediately ordered the Head of Investment Coordinating Board (BKPM) as well as related Ministers to simplify licensing process which previously could take 3 months, 6 months, or even one year.

At first, it was difficult. Some people wanted to but some people did not. I knew, it was because they can get a lot of money from it. But now, alhamdulillah, to process eight licenses, not one, it only takes three hours, the President explained.

The President reminded that the current development must be accompanied by improvement of services for the public, investors, investment, capital as well as cash flow.

It should also be applied in this Airport. It will be useless if the renovation of this Airport is not accompanied by the following steps, for example,the improvement of licensing process in order to attract investors, the President said.