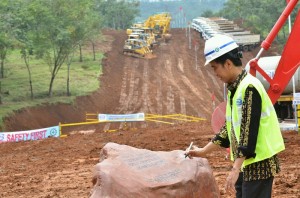 An efficient country is a country that can make a decision rapidly and can rapidly develop as well. This country will be the winner of competition between countries, the President said while mentioning that this high-speed rail line is one of the manifestation of the rapid development.According to the President, the speed of goods and people mobility will support us to win the competition.

He also mentioned mass transportation issue. For decades, we rely on private transport and do not pay enough attention to public transport. Nevertheless, there are a lot of cities, beside Jakarta and Bandung, that must face congestion problems. Therefore, the solution is mass transportation.

Thats why, two years ago, the construction of Jakarta MRT was started because I want better public transportation, the President said.

The President explained that the construction of Light Rail Transit (LRT) for Greater Jakarta (Jakarta, Bogor, Tangerang, Bekasi), that has been planned for a long time, was started last year because the Government wants a good mass transportation that links Jakarta and its surrounding cities.

The MRT, LRT, train, fast train, and bus are mass transportations that we must prioritize, the President said.

The President also explained that last week, Governor of West Java said and asked after the high-speed rail line completed, the LRT in Bandung must be completed as well. It is not only for Bandung, but also for Greater Bandung.

I have answered and immediately decided to manifest the intentions of the Governor, the President affirmed and he received applause from the guests of the groundbreaking.

The President also asserted that the construction of the facilities of Jakarta-Bandung high-speed rail line does not use the State Budget and without the Governments guarantee.

It should be Indonesia centrists, instead of Java centrists. Its our intention, the President said.

Therefore, according to the President, this high-speed rail line will use investment fund, not the State Budgets fund because if we use it, the people outside Java will ask: Pak, why does the budget spend mainly for Java? What about other regions? Papua, Sulawesi, Kalimantan? It is their question, the President said.

With this kind of financing scheme, cooperation between Chinas and Indonesias State-Owned Enterprises, in infrastrucure development acceleration, the Government can concentrate to use the State Budgets fund to develop infrastructure in Sumatera, Kalimantan, Sulawesi, and Papua. In the meantime, the development in more developing regions will be used the scheme of State-Owned Enterprises investment.

On that occasion, the President also saw the scale model of the high-speed rail line construction and listened to the explanation of the Managing Director of PT Kereta Api Cepat Indonesia-China Hanggoro Budi Wiryawan.