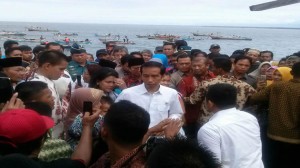 President Joko Widodo (Jokowi) meets people of fishermen village in Malabero during his visit in Bengkulu, on Wednesday (26/11). There, President Jokowi accompanied by Minister of Marine and Fishery Susi Pudjiastuti talk with fishermen and ladies who sell fish. Mam, how much do you earn from selling fishes?, President Ask. One of them replies Rp.500,000 each day, sir. But it is not always certain, could be less during end of month. President Jokowi gets surprise by the answer that is a lot. Multiply it by 30 than you get 15 millions rupiah. The merchant again reply Yes sir, but that is only during holiday and early month.

President Jokowi gives allowance to the people of that village. The allowance is not only for fishermen but also chicken noodle merchants and tailors.

President Jokowi asks the people of Bengkulu to participate in program initiated by the government for improving the welfare of fishermen. One of the actions is to watch and forbid the use of Pukat Harimau (trawl), bomb, and illegal fishing.

I ask Minister Susi to take note of inputs come from fishermen, and follow them all. Budget needed would be allocated from the government, says President Jokowi. Previously, Minister Susi explains that government would not transfer the allowance to people in fishermen village there , if there are still trawls operates found.

Afterthat, the President continues his visit to a traditional market under the program of Pasar Percontohan Nasional (PPN) Traditional Panorama, and talks with merchants there. At 10:05 AM, President and delegation head to Riau province for three days until November 27th 2014. (Ram/Humas Setkab/ES)(Ifp)