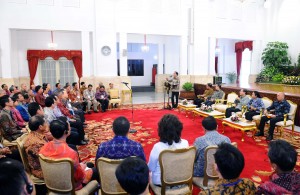 President Joko Jokowi Widodo gathered as many as 150 investors of power plant in order to accelerate the procurement of 35,000 Mega Watt (MW) Capacity Power Plant project, at the State Palace, Jakarta, on Tuesday (22/12) afternoon.

The President asserted that the issue of electricity is not only the concern of State-owned Electricity Company (PLN), but also becomes the concern of the country and the Government. Why? Because everytime I visit a region or a province, the complaint is the same. The electricity is byarpet, unstable. Electricity outages could be four times a day, eight times, two times, or even all day. There is electricity shortages. That is what I found in every region, President Jokowi said.

However, the President mentioned that it is neither the Ministers fault, nor the Managing Director of PLN. Yet, the problem trully exists and must be fixed.

With the development of industry and economic growth which have been calculated, according to the President, the demand for electricity is 35,000 MW. The President believes, we are able to meet the target, with note that any complicated permits must be cut, so does the permits that take years to be finished, either in PLN, ministries, central or regional governments.

Thats what we do now. Thus, in this afternoon meeting, I want to reassert that the need is 35,000 MW, President Jokowi fimly said.

President Jokowi admitted that 35,000 MW is not a small number. It is a big number. Therefore, the President always call the Minister of Energy and Mineral Resources (ESDM) everyday, every week, every month, because the President does not want to miss the target.

Alhamdulillah, it is already reported, that until the end of the year the number has reached 17,300 MW. The rest will be followed up and signed in another 6 or 12 months, President Jokowi said while delivering his belief that we will meet the target of 35,000 MW if the electricity capacity exceeding 10,000 MW.

The President asserted that he will monitor the progress of this project and he will work in detail. The President said that he wants to know whether the document he had signed will soon be implemented or not.

We have another problem, which is the preparation of transmitters along 46,000 km that must be finished. The problem should be solved one by one. I already encountered the second problem and I hope it will be finished soon, President Jokowi added.

On that occasion, President Jokowi also expressed his readiness to help the investors on land acquisition issue. The Minister of Agrarian and Spatial Planning/the Head of National Land Agency (BPN) is here. I want to say that we will help. Because with the electricity, particularly on remote areas, children could study at night, small-sized garment industries at villages could work at night as well. We do not talk about business anymore. Electricity is the peoples interest, President Jokowi said.