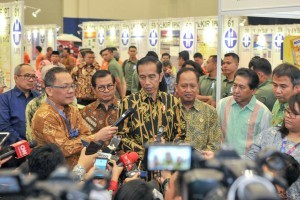 President Joko Jokowi Widodo said that the fourth industrial revolution, popularly known as Industry 4.0, particularly the development of information technology has brought new challenges in our social morality and the world as well.

The President cited an example of the phenomenon of the emergence of non-editorial media, which made every citizen able to become a journalist. Anytime there is news, information, then it is immediately spread, the President said when opening the 2018 Indonesia Science Expo (ISE) Exhibition at the Indonesia Convention Center (ICE) Serpong, South Tangerang, Banten, Thursday (1/11).

Editorial meetings that were once neatly organized, the President continued, are now replaced by the role of social media, and thumbs up or like now become the editor-in-chief on social media. Anyone can inform you anything.

In the face of this phenomenon, according to the President, government regulations are not enough to resolve the problem since not all things can be anticipated by regulations.

For this reason, what is needed now is a higher morality standard in line with the use of technology, the President explained, adding that together we must disseminate the responsibility we bear in using social media.

Do not let the new technology and openness make us spread utterances of hatred, malice, slander, hoaxes due to our poor morality, the President said.