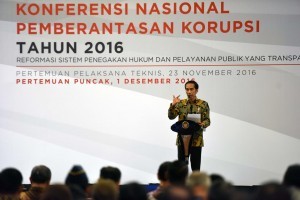 President Joko Jokowi Widodo is determined to continue eradicating corruption cases seriously even though there are hundreds of Government officials – be it in central and regional levels – who were arrested in corruption cases and the fact that Indonesia is still ranked 88 in Corruption Perception Index.

I want to reaffirm the commitment of all Government apparatus and also my commitment to continue eradicating corruption and take this matter seriously. Although, Indonesias ranking in Corruption Perception Index is 88, the corruption eradication in Indonesia will never stop, President Jokowi said in his remarks during the Opening Ceremony of the 2016 National Conference on Corruption Eradication (KNPK), on Thursday (1/12) at the Balai Kartini, Jakarta.

According to the President, 122 House of Representatives and Regional Legislative Council members, 25 ministers or heads of institutions, four ambassadors, seven commissioners, 17 governors, 51 regents/mayors, 130 state officials (echelon 1- 3 officials) and 14 judges have been sent to prison due to corruption. Do not applaud for the number. Because I think, the fewer person arrested in corruption case, the more successful we become in corruption prevention and eradication, President Jokowi said responding to the applause from the participants.

President Jokowi admitted that he felt uneasy when member of the United States congress asked him about the progress of corruption eradication in Indonesia. At that time, I answered that there are several ministers, governors, regents/mayors, and members of House of Representatives as well as Regional Legislative Council who are imprisoned due to corruption. However, I asserted that this is not an achievement. We can call it achievement once our public service is improved, or once the Government system runs effectively, the President stated.

According to the President, the fact that many Government officials are imprisoned on corruption cases makes him wonder; why corruptors are still defying the law though many of them had been arrested and imprisoned.

That means our law enforcement has not given a deterrent effect for the corruptors yet, the President added.