President Jokowi Affirms That No Tolerance for Burner Forest 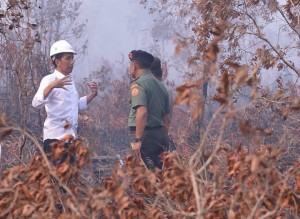 “I have instructed the head of the national police to take firm action, as hard as possible for companies that do not comply,” said President Jokowi when reviewing a forest fire in Pulau Geronggang Hamlet, Pedamaran District, Ogan Komering Ilir Regency, in his working visit to South Sumatra, Sunday (6/9).

According to the President Jokowi, most fires in South Sumatra. However, today the number decreased from 321 to 129 points. In fact, President continued, last year 8,000 ha of forests were burned, now 1,000 ha less.

In a twitter account @okowi that uploaded Sunday (6/9), President Jokowi said, although the area of forest burned this year has decreased, but still there is no tolerance for perpetrators of forest burning.

President Jokwi also reminded all ministries, military/police, and all related, that the best action is prevention. For that reason, the President requested that created the system in which landowners has an obligation to prevent, so the fire is not repeated.

On that occasion, the President also reminded that he has been moving people to supervise and control in order to prevent fires since April 2015.

“Do not have occurred extensive fire, it becomes difficult. So I had to say, I no longer want to talk about what the cause, what the solution is. Everything already knows what to do,” Jokowi said.

However, at this time President Jokowi asking immediately to solve the problem of fires on the grounds, but next year the prevention must be in priority.  (WID/ES)/Sy