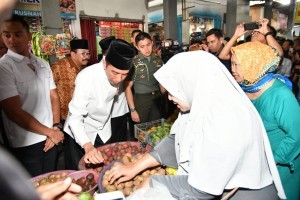 President Jokowi and Governor of East Java Soekarwo check prices at a market in East Java, Monday (19/11). Photo by: BPMI

President Joko Jokowi Widodo during his work visit to East Java said that he always checks the fluctuating prices of basic commodities and food in Indonesia every morning.

“Almost every day, every morning, I read numbers. I have numbers for my breakfast. The prices of rice, chili, meat, and vegetables are served on my table every morning,” the President said during the groundbreaking ceremony of the construction of Muhammadiyah University tower and the inauguration of Ki Bagus Hadikusumo campus mosque in Lamongan, East Java, Monday (19/11).

President Jokowi added that the data help him to immediately take action if there is a possibility of an uncontrolled surge in prices of basic commodities. The President often contacts the related officials to respond to the fluctuating prices.

“If the price goes up a little, lets say Rp100, I will immediately call the Head of National Logistics Agency (Bulog), Minister of Trade and Minister of Agriculture to intervene the market and control the prices, the President said.

In the meantime, President Jokowi praised East Java Regional government which is able to control inflation and boost economic growth in East Java.

Low inflation rate accompanied by high economic growth in East Java prove that the economy in the area is in a very stable condition.

“I would like to congratulate Mr. Governor for the high economic growth and low inflation in East Java. I think (the achievement) will benefit the people, President Jokowi said.

Previously, Governor of East Java Soekarwo, who accompanied President Jokowi during the visit, reported that the inflation rate in the Province is 1.78% while the prices of basic commodities are relatively stable, based on the data taken from 110 markets in East Java.