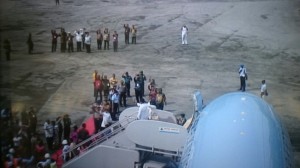 Ending their two days visit in Papua, President Joko Widodo (Jokowi) and First Lady Iriana leave Papua on Monday (29/12) afternoon from Air Force base in Manuhua, Biak Numfor, West Papua. Prior to their departure, President Jokowi inspects Frans Kaisiepo airport which previously was the main airport during occupation by the Dutch. President wants to enlarge the airport so that it could be used as an international airport.

We shall see if it is possible, so then international flight could depart from here, he explains. In addition, President assess Biak Numfor has a very potential fishery which could make reason for enlarging the Frans Kaisiepo airport.

Fishery industry here needs to be enhanced due to its potential which is so huge, says Jokowi.

Previously reported that President Jokowi and Madame Iriana visit Papua since Saturday (27/12). The main schedule was to attend National Christmas celebration of 2014, at Mandala Stadium in Jayapura. Other schedule were to officially starts the development of Pharaa and Mama-Mama market in Sentani  Jayapura, meets and greets his volunteers, and inspect the location of Holtekamp bridge construction which would connect Toubati Enggros island and Holtekamp region in Jayapura.

From Jayapura, President Jokowi and his entourages flew to Wamena to meet and dialogue with traditional leaders of Lembah Baliem. Continues to Sorong to inspect the construction of Rufei market and Pelni harbor, have dialogue with local leaders on Sunday  Monday.

Next, visit fisherman village in Malawei district and have dialogue with the regent, local traditional leader of West Papua at the regents office, Monday morning. After that, President Jokowi and entourages return to Jakarta from Air Force base in Manuhua. They are scheduled to arrive at Halim Perdanakusuma airport in Jakarta on the same day, around 01:15 PM.(*/ES)(Ifp)