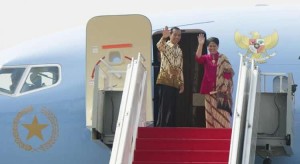 The President will also distribute Indonesia Healthy Card (KIS), Indonesia Smart Card (KIP), and Family Welfare Card (PSC) to the poor, as well as reviewing the construction of port and dam located in the border district of Trenggalek and Ponorogo.

National Conference with the theme “Islam Wasathiyah for Indonesia and the World that being Civilized and Fairness” will be held until 27 August 2015. Agenda among others discuss of MUI program for the next five years and the election of a new chairman of MUI.

The Election of Chairman of MUI will be determined by a formateur team whose the members are elected through a mechanism that applies in regulation IX National Conference 2015 of MUI.

The formateur team consists of 15-17 members that elected based on representatives of the region and a number of the domisioner board of MUI Headquarters previous period.

The 9th National Congress of MUI held at Garden Palace Surabaya, Jl Yos Sudarso on 24 to 27 August 2015, with the main agenda the election a chairman and board for a period of five years into the future. (WID/ES)