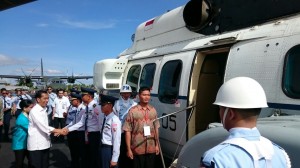 President and First Lady Iriana Jokowi have arrived in Nunukan, and will proceed to Sebatik Island, Tuesday (16/12)

On the last day of his working visit to North Kalimantan Province, the President accompanied by First Lady Iriana Joko Widodo on Tuesday (16/12) morning, leaving Tarakan towards Nunukan. Hereinafter, the President and his entourage will proceed to Sebatik Island to visit the border between Indonesia – Malaysia.

During in Sebatik Island, President Jokowi and First Lady will review the Post Kotis Marines in Sei Bajo, East Sebatik District, Tanah Kuning Patok II and Navy Post Sungai Pancang that can see the Tawau city directly, one of the cities in Malaysia.

Cabinet Secretary Andi Wijayanto through the short message said that during visiting to Sebatik Island, the point of concern of President Jokowi are border insfratruktur, border communications, and border security.

Irianto hopes to invite President Jokowi reviewing the Port of Tunon Taka in Nunukan, which is a boundary port, where entry and exit of goods and people from Malayasia. By showing this port, it is expected that President Jokowi could support the construction of the building expansion of the port in this border area.

Although this post is not fully functioned, but the North Kalimantan Provincial Government could improve in 2015. “We show to the President, that this Nunukan is the traffic lane of goods and people to Tawau,” said irianto.