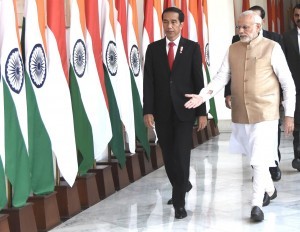 Indonesia wishes to increase its trade with India and to export more varied products, the President said when delivering his statement at a joint press conference after the meeting.

At the moment, Indonesias export to Indonesia is dominated by Crude Palm Oil (CPO) and coal. The President expected that in the future, Indonesia export commodities will be more varied.

The President was happy because the two countries have signed an MoU of Trade Standardization. He believed that this MoU can increase trade and support economic cooperation.

Meanwhile, regarding people to people contact, President Jokowi said that transportation has an important role in improving the relations between both countries people. Therefore, the President announced direct flight from Jakarta to Mumbai by Indonesias national airline Garuda Indonesia.

I am happy to announce that starting today, Garuda Indonesia will fly directly to Mumbai from Jakarta, the President said.

On that meeting, both leaders signed three MoUs covering several sectors, such as trade standardization, sports, and illegal fishing.

Those MoUs are, as follows: