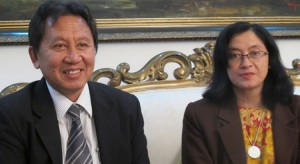 When starting the plenary session of the Cabinet, in the president’s office, Jakarta, Tuesday (19/5) afternoon, President Joko Widodo (Jokowi) expressed deep sorrow on the passing of Indonesian Ambassador to Pakistan Burhan Muhammad, Tuesday (19/5) morning, in Singapore ,

“My condolences on the death of our ambassador to Pakistan, at the Singapore General Hospital. Hopefully the deceased gets a good place on the side of God and the family left behind gaining strength in the face of this ordeal,” President Jokowi said.

According to the President Jokowi, Ambassador Burhan Muhammad died at the Singapore General Hospital, today at 05.00 local time, and will be brought to Jakarta, this afternoon.

“I want to convey the return of the bodies of Mr. Burhan Muhammad to Jakarta in the afternoon, and will be buried at Gedung Pancasila at the Ministry of Foreign Affairs, in order to give tribute officially,” President Jokowi said.

Furthermore, the President said that on Tuesday (19/5) evening, the deceased will be taken to a funeral home in Yogyakarta, and will be buried in the last resting place.

Condolences of the Government

Previously, Minister of Foreign Affairs Retno L.P. Marsudi has officially announced about the death of Ambassador Burhan in a statement of condolences, in room Palapa, Ministry of Foreign Affairs, Jakarta, Tuesday (19/5) morning.

Minister of Foreign Affairs Retno expressed deep condolences over the death of Ambassador Burhan Muhammad. “Hopefully the acts of worship and devotion of the deceased accepted by God and the family left behind strengthened.”

Ambassador Burhan Muhammad died after struggling for 8 days at the Singapore General Hospital. He was being treated since May 2, 2015 due to a helicopter crash that occurred in Girgit Baltistan, Pakistan on May 8, 2015 ago. He followed his late wife Heri Listyawati who died in the helicopter crash incident, and was buried on 15 May 2015 in Yogyakarta.

Ambassador Burhan Muhammad officially serving as Ambassador Extraordinary and Plenipotentiary to the Islamic Republic of Pakistan which is based in Islamabad since presented his credentials on November 12th of 2012. (Humas Setkab/Dit Infomed Kemlu/ES)