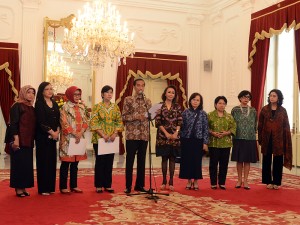 President Joko Widodo (Jokowi) after receiving the Committee of Selection for the Chairman of the Corruption Eradication Commission (KPK) Candidate, led by the chairman Destry Damayanti, announced 8 (eight) candidates name of KPK leaders who pass the selection to be submitted to the Parliament for the fit and proper test.

“From the stages of selection has been done, namely, registration, announcement result of administrative selection, objective test and making of paper, then profile assessment, interview and medical tests, has been handed over to me 8 (eight) candidates KPK commissioner 2015-2019, which has been selected on the basis of integrity, competence, leadership, independence, and also experience related to matters relating to the eradication of corruption,” said President Jokowi told reporters at the State Palace, Jakarta, Tuesday (1/9).

The third related to management: 1. Agus Rahardjo, former Chief LKPP (Institute for Procurement of Goods / Services); and 2. Sujanarko, Director of Network Development of Cooperation among the Commissions and Agency of KPK.

The fourth related to supervision, Coordination and Monitoring: 1. Johan Budi Sapto Pribowo, Acting Chairman of the KPK; and 2. Laode Mohammed Sharif, Rector of the Law Faculty of Hasanuddin University and Senior Adviser Partnership for Governance Reform in Indonesia.

According to the President Jokowi the eighth of KPK leaders candidates chosen by the selection committee tomorrow will soon be submitted to the Parliament for the fit and proper test.