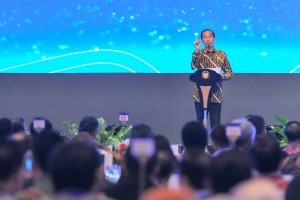 I am very much aware of how hard the battle is from time to time, President Jokowi said at the Bank Indonesia Annual Meeting at Jakarta Convention Center (JCC), Jakarta, Tuesday (27/11).

The President acknowledged that BI had intervened the market by hiking interest rates to stabilize the currency against US Dollar, leading to the Rupiah strengthening significantly in the last 3 weeks and staying in the range of Rp14,500 per US dollar (26/11)hari apa tanggal berapa).

President Jokowi went on say that the central bank on 15 November once again surprised the market by raising the Rupiah interest rate by 0.25% or 25 points to 6%.

Data showed that from 31 economists surveyed by Bloomberg, only 3 of them predicted that BI would raise the interest rate and the market was really surprised by the decision. This decision was welcomed by the market and BI has showed its determination to protect the Rupiah, said the President.