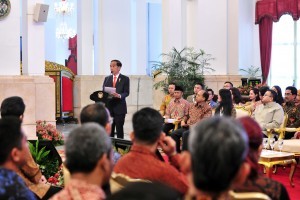 President Jokowi delivers his remarks at the Opening of National Public Relations Conference 4.0, at the State Palace, Jakarta, Monday (10/12). (Photo by: Jay/PR Division)

President Joko Jokowi Widodo conveyed his concerns over the spreading of negative, provocative news, as well as hoaxes that considered to bring conflict, which clearly ignore ethical concepts in conveying information.

In fact, in the name of certain interests, the hoaxes are deliberately spreaded to arouse fear, pessimism, to spread terror, anxiety, angst, and threat, President Jokowi said in his remarks at the Opening of National Public Relations Conference 4.0, at the State Palace, Jakarta, Monday (10/12).

The President asserted that regulations and law enforcement measures are not enough to fight them. It requires digital literacy that will make the people be able to use technology to access digital information and also to select and sort information, to cross-check, and to clarify everytime they get new information.

According to President Jokowi, the rapid advancement of digital information technology must be coupled with high moral and ethical standards from its users. Therefore, the President appreciated efforts of the Public Relations Association of Indonesia (Perhumas) which has been consistently promoting #IndonesiaBicaraBaik. For the record, #IndonesiaBicaraBaik is a campaign that encourages Indonesian to start speak positive.

This is one great campaign. I notice that the hashtag always appears on every Perhumas events, on its website, in association letters, on the backdrops of the events, and on the Perhumas posters. The words we speak should be positive, President Jokowi said.

The Head of State also stated that he strongly agreed that #IndonesiaBicaraBaik is considered a social movement invitation, an invitation to change for the better.

President Jokowi asserted that speak possitive does not mean covering up for our lack. We must be honest that there are many to be improved, fixed, and reformed. There are programs that must be accelerated and finished no matter what, the President added.

If you want Indonesia to improve, to become an advanced country, we need criticisms that are based on data, not lies or hoaxes. A constructive criticism, not narratives that spreading pessimism and fear, President Jokowi firmly said.

Also attending the event were, among others,  Minister of Communication and Informatics Rudiantara, Presidential Chief of Staff Moeldoko, and Perhumas General Chair Agung Laksamana. (FID/JAY/ES)