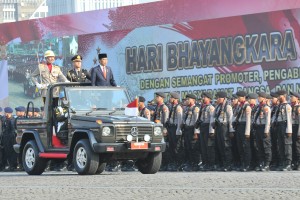 President Jokowi conducts inspection of the troops during a ceremony to commemorate the 73rd anniversary of Bhayangkara (the National Police), at the National Monument (Monas) square, Jakarta, Wednesday (10/7). (Photo by: Jay/PR)

President Joko Jokowi Widodo applauded the Indonesian National Police (Polri) for working hard to succeed the organization of national events during the past two years, including the simultaneous regional election, the Asian Games and Asian Para Games, as well as the IMF-World Bank Annual Meeting in 2018, and the 2019 simultaneous elections.

Alhamdulillah, praise be to Allah, we have successfully organized all events. It is all thanks to you who created synergy with the Indonesian National Defense Forces (TNI). For that reason, allow me to extend my highest gratitude to you, President Jokowi said in his directives during Commemoration Ceremony of the 73rd Anniversary of the National Police or commonly called Bhayangkara Day, at the National Monument (Monas) square, Jakarta, Wednesday (10/7).

The Police also plays significant role in maintaining public security and order. They have managed to create peaceful and joyful Ramadan month, mudik (annual exodus ahead of Eid Day), Eid Day, and Christmas, as well as to create a prompt disaster management amid difficult challenges.

Once again, it is all because of the hard work of the Polri and TNI and I thank you, President Jokowi said.

Also on that occasion, the President invited all people attending the ceremony to pray for police personnel who have been killed or injured in the line of duty, as well as for their families.

President Jokowi also expressed his appreciation to the Polri for receiving unqualified opinion (WTP) from the Supreme Audit Agency (BPK). The Polri has made many improvements, including in terms of public trust, bureaucratic reform, and integrity zone development, he added. However, thisinstitution must increase its professionalism, achievement, accountability, and transparency to face the current increasingly complex challenges.