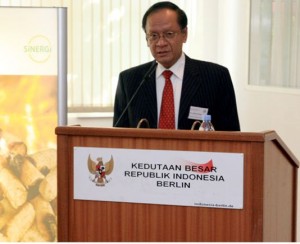 As a follow-up meeting with the Prime Minister (PM) of Malaysia Najib Razak on State Visit to Malaysia, and meeting the Indonesian Foreign Minister and Minister of Foreign Affairs of Malaysia in Kinabalu City, some time ago, President Joko Widodo (Jokowi) has appointed Ambassador Eddy pratomo as Special Envoy of the President, for the Determination of the Maritime Boundary between the Republic of Indonesia and Malaysia.

A press release of the Ministry of Foreign Affairs on Wednesday (10/6) states, the appointment of the Special Envoy of the President is the realization on the determination and earnest efforts of Indonesia to accelerate the completion of the determination of the maritime boundary between Indonesia and Malaysia.

According to a press release the Ministry of Foreign Affairs, so far, Indonesia and Malaysia still need to resolve maritime boundary in five (5) segments, namely in the Celebes Sea, South China Sea, the Eastern part of the Singapore Strait, the South part of Malacca Strait,  and the Strait of Malacca.

Ambassador Eddy Pratomo is a senior Indonesian diplomat with a background in legal education and has been assigned to the bilateral and multilateral Indonesian Representatives.