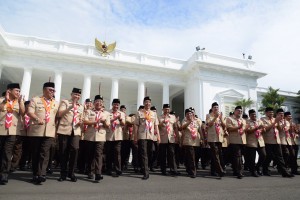 President Joko Jokowi Widodo on Thursday (27/12) at the central courtyard of Merdeka Palace, Jakarta, appointed Budi Waseso as Chairman of the National Council of Indonesian Scout Movement (Pramuka) for the service period of 2018-2023.

On that occasion, the President also appointed members of Pramukas National Council committee.

The appointment is based on Presidential Decree Number 67/M of 2018 on 26 December 2018 on the Inauguration of the National Council of Pramuka Assembly for term of 2018-2023.

In his remarks, President Jokowi ordered the committee members to understand Law Number 12 of 2010 because the stipulation is the legal basis for the Pramuka. The President also told them to read and understand the contents of the Pramuka’s Articles of Association.

Trisatya, for the sake of my honor, I solemnly swear I will earnestly carry out my obligation to the One and Only God and the Unitary State of the Republic of Indonesia, to practice carry out Pancasila (state ideology) with devotion, to help others, to participate in developing the community, and keep the ten Pramukas duties, President Jokowi said, followed by the committee members.

May the God always give His guidance and protection for all of us. Amen, the President said. (FID/EN)