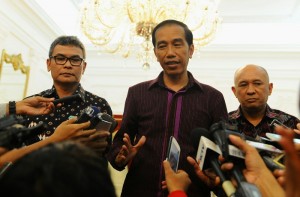 President Jokowi when announcing the appointment of Johan Budi as Presidential Spokesperson at State Palace, Jakarta (12/1)

Johan will be tasked to communicate the President and the Governments programs to the public.

Im glad that we now have more competent people at the Palace who help me, the President said at Merdeka Palace, Jakarta, on Tuesday afternoon (12/1).

The President also said that the Government had always instructed every ministry and institution to explain their programs to the public. He also said that Johan would also be responsible for coordinating public relations officers in the ministries so they can be integrated and solid.

I told him what his duties are. Hes an experienced person and I hope he can help me to communicate the Governments programs, the Presidents programs, President Jokowi said to reporters.

In the meantime, Johan said that the President had previously asked him to take up the position.

After Ive met the President, I finally decided to help him so that I can also give concrete contributions, Johan said.

He added that his experience as a journalist for 12 years and his 10-year tenure at KPK, where he was assigned more as a spokesperson and to explain KPKs programs to the public, could be useful for the current government.

Commenting on his new position, Johan said: One of my tasks is to communicate the President and the Governments programs. Related to the ministries, those ministries can also communicate what they have done, he added.

Johan Budi, a former Tempo journalist, was born in Mojokerto on 29 January 1966. In 2005, he was appointed as staff at KPK Directorate of Education and Public Service. From 2006 until 2015, although he was given different tasks at the KPK, Johan was also assigned as KPK Spokesperson. Afterwards, President Jokowi appointed him as Acting Commissioner of KPK, along with Taufiequrachman Ruki and others. (GUN/SLN/OJI/ES) (EP/YM/Naster)