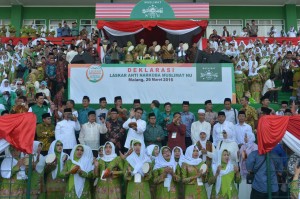 President Joko Widodo accompanied by the Governor of East Java during the 70th Anniversary of Nahdlatul Ulama, at the Gajayana Stadium, Malang, on Saturday 26 March 2016 afternoon

President Joko Jokowi Widodo said that family, as the smallest community in the society, plays an important role in the development of the country because children are first taught about morality, etiquette, and other basic things by their families.

Before thousands of Muslimat Nahdlatul Ulama (NU), President Jokowi asserted that mothers are the first and the most important educational institution for children.

Thus, it is no exaggeration to say that Muslimat NU has played a great role for the country and the nation, the President said during the 70th Anniversary of Nahdlatul Ulama (NU), on Saturday 26 March 2016, at the Gajayana Stadium, Malang.

Those roles, the President added, have contributed to create healthy, intelligent, and religious children, as well as improving the economy of the family.

In his remarks, the President mentioned that the world changes rapidly and we will face not only competitions among person, organization, cities, and provinces, but also among countries.

The current competition is among countries, the President said.

In order to win the competition, the President added, we do not only need intelligence, but also human resources along with optimism, hard work, and sense of mutual cooperation.

Besides competition among countries, the President also reminded all about radicalism, terrorism, and drugs which occur around the world.

Alhamdulillah, an Anti-Drugs Troops has been declared by NU to address drugs issues. It is such a fast reaction to face change of era, President Jokowi said.

As a conclusion, the President added, Muslimat NU, as an organization has integrated with Indonesias soul.

As an organization that has a long history of struggle, which is around 70 years, President Jokowi instructed Muslimat NU to strengthen their commitment and fight for the sake of ummah, nation, and country.

The President also emphasized that Muslimat NU is a bil-hal dakwah (Islamic Proselytism), which is a dakwah with concrete work. It is not only bil lisan or verbal dakwah. Through dakwah with concrete work, I believe the number of Majelis Taklim (Islamic study group), educational institutions, social and health institutions, as well as co-operative of Muslimat NU will increase in the future, the President said.

The President reminded all that Indonesia is currently having serious drugs problems where 30 to 50 children die every day.

Once again, I want to appreciate what Muslimat NUs Anti-Drugs Troops has declared, the President stated.