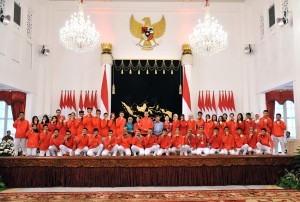 President Joko Jokowi Widodo expressed appreciation to the related parties for the great success of the 18th Asian Games. The President also expressed his pride for the achievement of Indonesian athletes who won 31 gold medals – the highest achievement in the history of its participation in the Asian Games. This was enunciated by the President in his speech during the handover of bonus to the 2018 Asian Games Medalists, at the State Palace, Jakarta, Sunday (2/9) morning.

“I want to ride the motorbike again and fly into the air. I want an additional 31 gold medals. I also want to continue to see the red and white fluttering and the Indonesia Raya song continues to be sung,” the President said.

The President underlined how difficult it was to serve 17,000 athletes and officials, 7,000 journalists, and 150,000 supporters from 45 countries. He also admitted that it took only 3.5 years for Indonesia to prepare for the 2018 Asian Games to build infrastructure and sports facilities which meet international standards.

“We have only 3.5 years. Other countries prepare things like this in seven, eight, ten years,” the President said. To that end, the President, Vice President, and the ministers regularly check the venue.

When it comes to security, the President admitted how hard it was to ensure security so that all athletes feel comfortable during their stay in Indonesia.

Following the success of the 2018 Asian Games, after meeting with President of the International Olympic Committee (IOC) Thomas Bach in Bogor, President Jokowi said that Indonesia will bid to host the 2032 Olympics.

“I told him that Indonesia is ready to bid to host the 2032 Olympics,” the President concluded.