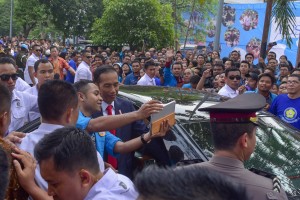 Speaking at the 65th Dies Natalis of Indonesian Christian University (UKI), President Joko Jokowi Widodo asked the people to appreciate the achievements made by Indonesian athletes at the 2018 Asian Games and Asian Para Games.

President Jokowi said that appreciate means that not looking for mistakes such as when he jumped with a motorcycle. The president sait it when attending the UKI Lustrum XIII, 65th UKI Dies Natalis, at UKI Campus, Cawang, Jakarta, Monday (15/10).

Usually, the President added, we ranked 22nd, 17th, or 15th. When we are united, we never speak of someones religion, or which province he or she came from, what is his/her tribe. We only speak as one Indonesia, Indonesia Raya, our flag, turns out we can achieve the fourth place.

President Jokowi explained, at every progress, universities always play central role. Even when facing with scientific and technological development. University should foresee things that are changing and should immediately adapt, because the impact gives a significant landscape to our daily activities, on a social or cultural landscape, political landscape at the global, national, or regional levels, everything will change, our economic landscape will also change. Therefore, its the universitys role to adapt this impacts.

Today, President Jokowi added, it is Industrial Revolution 4.0 that made a significant impact. He quoted McKinsey Global Institute the changes will most likely be 3,000 times quicker than the first industrial revolution.

What does it mean? It means that our world is changing, is changes rapidly. We all know artificial intelligence, internet of things, virtual reality, and advance robotic. Rapid changes, we only learn about one thing than another thing came, said President Jokowi.

Also present at the event were Minister of Research and Technology and Higher Education M. Nasir, UKI Rector and UKIs academic community. (DNA/JAY/ES)(HYP/YM/Naster)